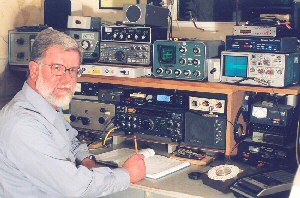 Not very active on radio now due to high levels of local broadband noise from neighbours' appliances; Thinking of trying a magnetic loop antenna for low-noise reception;

Still like to tinker with precision frequency measurements, an 'art' I learned at CSE;

Despite not being very active on the air, I am a member of RAC, ARRL, QCWA, FISTS, SKCC, and QRPARCI;