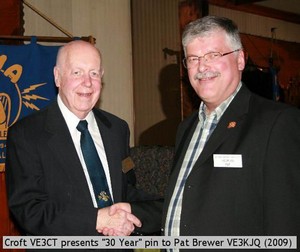 Member of RAC and its predecessors since 1979

One of the founders of the OVMRC Amateur Radio Course and taught the regulations and Morse code portions of the course for nine years.

Co-authored the text book “Amateur Radio for Beginners” published in 1992 by the OVMRC and distributed nationally by CARF and later RAC for a period of about nine years through a couple of editions.

Also, a member of the Ottawa Amateur Radio Club, and the Ottawa Valley QRP Society.

Enjoy operating contests as a QRP station all modes, and higher power for non-contest operating.

Life Member of QCWA and member of Chapter 70. QCWA "40 Year Licensed" certificate and pin presented in May 2020.