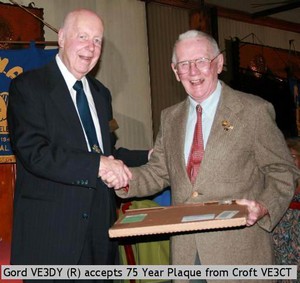 Gord grew up in Ottawa.

He was active on the HF bands – phone and CW. Earlier he was very active on 6M and 2M FM, mobile and fixed. Not keen on DX, but keen on QRP. In recent years, Gord has been Net Control on the VE3STP Champlain Repeater 2M FM Net.

He was also a founding member of OVMRC, and served as Activities Coordinator (1958) and Secretary-Treasurer (1959-1960)

Gord was also a member of Radio Society of Ontario during its short life.

Gord is a member of QCWA and Chapter 70. At the Chapter 70 September 1991 dinner meeting Gord gave a presentation on “The Effects of Solar Radiation and the Earth’s Magnetic Field on Long-Distance Power Lines and Substations”.

He also spoke on “Ionosphere, Sunspots and the Solar System” at the Chapter 70 May 1999 dinner meeting. Gord also served on the Organizing Committee (event souvenir pins) for the QCWA 2004 International Convention.

He received his QCWA “75 Years Licensed” Golden Certificate and lapel pin at the Chapter 70 May 2009 dinner meeting. Gord also has received the QCWA Century Certificate. Received 80 Year Licensed Anniversary Award in May, 2014.