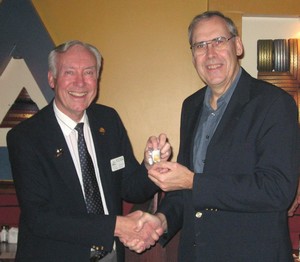 Grew up in Sudbury, Sault Ste Marie, and the Niagara Peninsula.

Would much rather be holding a soldering iron than a microphone. An avid builder of electronic projects for radio frequency and microprocessor-based measurement and control applications. Special interest in UHF/SHF and Amateur TV. Has also contributed to several local voice repeaters and holds the call sign for VE3TVA, the fast-scan television repeater.

Member of OARC and served on the executive. Frequent winner of Home-Brew Night.

Member of QCWA and Chapter 70. QCWA “35 Years Licensed” lapel pin was presented at the Chapter 70 May 2010 dinner meeting.